Fing Desktop Errantly Reports SmartThings Hub Down & Up In Loop

✭
October 6, 2021 in Fing Desktop discussions #1
Is there some sort of known issue with Fing Desktop and the SmartThings hub?

We have the premium network monitoring service but have been making little use of it the last several months because when I have it running on my primary Mac platform anytime even a single IOT device drops off the network while the hub remains running otherwise I get hub down then up over and over. This happens even when I've corrected the networking issue with the IOT device that has dropped away.

At first I thought it was the hub itself and have spent hours of time with SmartThings tech support. But then only by accident during a macOS upgrade when Fing had to be reinstalled that the issue disappeared. When I got around to reinstalling Fing two days ago all seemed fine at first but this morning one of my SmartThings/HomeKit Meross IOT plugs went offline reported by Fing with the MAC code. I fixed the issue and Fing Desktop cleared the error but the SmartThings hub continued to flap over  and over about every 10 minutes or so between being reported up and then down.

I removed Fing Desktop from my Mac (again it showed the network was fine) and the down/up errors stopped being reported to me. BTW, the hub was absolutely up and running the entire time.

Weird because it looks like the error is generated by the SmartThings hub so can not imagine how Fing Desktop could generate the issue. There definitely is some sort of interaction going on and I've had to leave Fing disabled for now.

Note that I fixed the 'device not able to get in network' issue at around 2:20PM after locating the device with the MAC code but the hub continued to report the issue over and over until 3:15PM ONLY after uninstalling FING desktop on my Mac. I did not reboot the hub itself during all of this just to be certain it was not the hub itself. Removing FING Desktop alone resolved the issue.

Has anyone seen anything like this? I've seen it twice now. 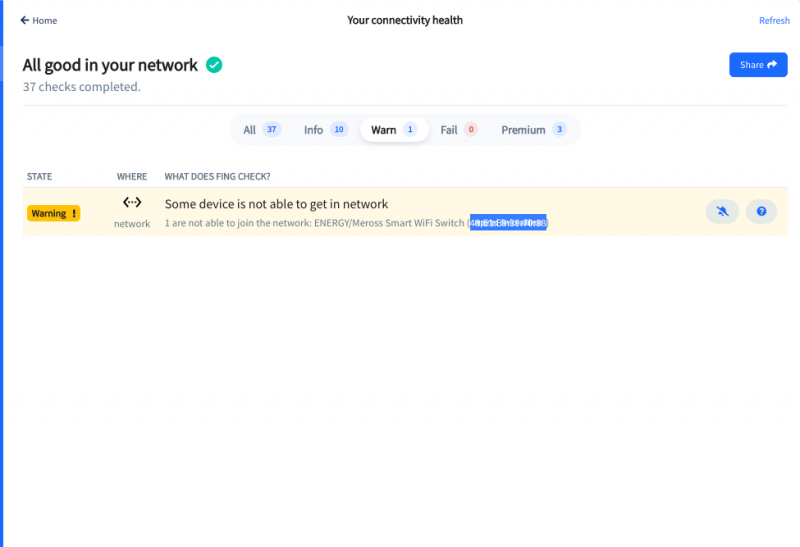