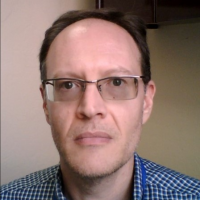 This seems like a strange issue but I don't know enough about networking to really understand what is going on. The symptom is that I can't ssh or hit http server on my raspberry pi from my Android phone while both are connected via the same wifi network. I have a NAS with an openvpn server running. If I connect to the vpn from my phone it can then find and connect to the pi. Unrelated, I think, I also have fingbox on the network.

Anyone know what's going on here or how to troubleshoot it? There is only one subnet. The vpn server is set up so port forwarding from the router allows me to connect to it from outside. But I'm talking about connecting directly to the vpn from within the network already. The vpn server is wired to the network. The pi and phone are connected to wireless APs. I also think this isn't a problem from windows devices on the network so maybe this is an android thing?